Images of Switzerland in motion 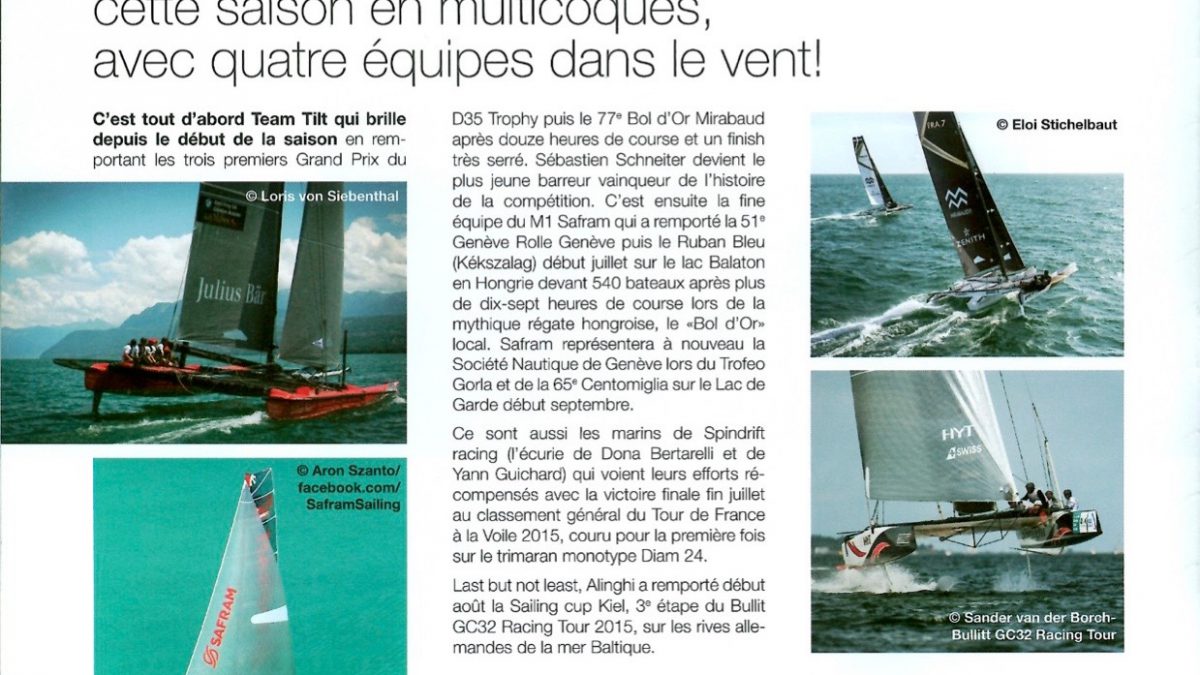 Swiss sailing team Safram skippered by Rodolphe Gautier and in partnership with Safram closed the 2015 racing season with another win on Lake Garda over the weekend, adding the Italian classic Centomiglia to the team’s trophy cabinet. The Safram campaign was created to promote Swiss sailing abroad and the team has won four of five events raced.

Gargnano, Lake Garda, Italy, 6 September 2015 – Swiss catamaran Safram won the Centomiglia, Italy’s largest lake regatta, on Saturday against a fleet of 120 boats, marking a second victory for the Ventilo M1 skippered by Rodolphe Gautier and helmed by Christophe Peclard on Lake Garda in just a few weeks to close the season on a high.

The Centomiglia is an Italian version of Switzerland’s Bol d’Or Mirabaud and is a ‘classic’ in its own right. The start sounded at 0900 on Saturday morning for the multihulls, just 30 minutes behind the monohulls, and the fleet set off from Bogliaco to the east of the Italian lake and headed north towards Torbole situated at the windiest point of the lake between the mountains. The 72-nautical mile course (116 kilometres) then took the fleet south and back to the finish line in front of the Circolo Vela Gargnano where Safram finished at 1530. It was a tough race, just short of the legendary Bol d’Or Mirabaud’s 123-kilometre course.

“We are delighted to finish such a successful season with another win,” said skipper Rodolphe Gautier. “The boat performs in all conditions as we saw in the heavy winds we had during the Centomiglia. Our last two events on Lake Garda were windy with conditions ranging from 15 to 25 knots and waves – a superb experience!”

“It was a fantastic event,” said helmsman Christophe Peclard. “Lake Garda lived up to its reputation and was consistently windy. The team sailed very well and it has been an excellent year overall!”

The Centomiglia marked the close of the season for the Safram campaign skippered by Rodolphe Gautier and partnered by the European transport company, Safram. The team’s objective was to promote Swiss sailing and the Bol d’Or Mirabaud in particular and they have certainly made their mark with four victories out of five raced across Europe, including the Geneva-Rolle-Geneva on Lake Geneva in Switzerland, the Blue Ribbon on Lake Balaton in Hungary, the Trofeo Gorla and the Centomiglia on Lake Garda, Italy, plus a 10th place at the Bol d’Or Mirabaud on Lake Geneva. The team has proudly represented the Swiss flag and the Societe Nautique de Genève abroad throughout the season.

For photography, videos and the latest news, please go to the team’s Facebook page

For results and additional information on the Centomiglia, please go to the official website