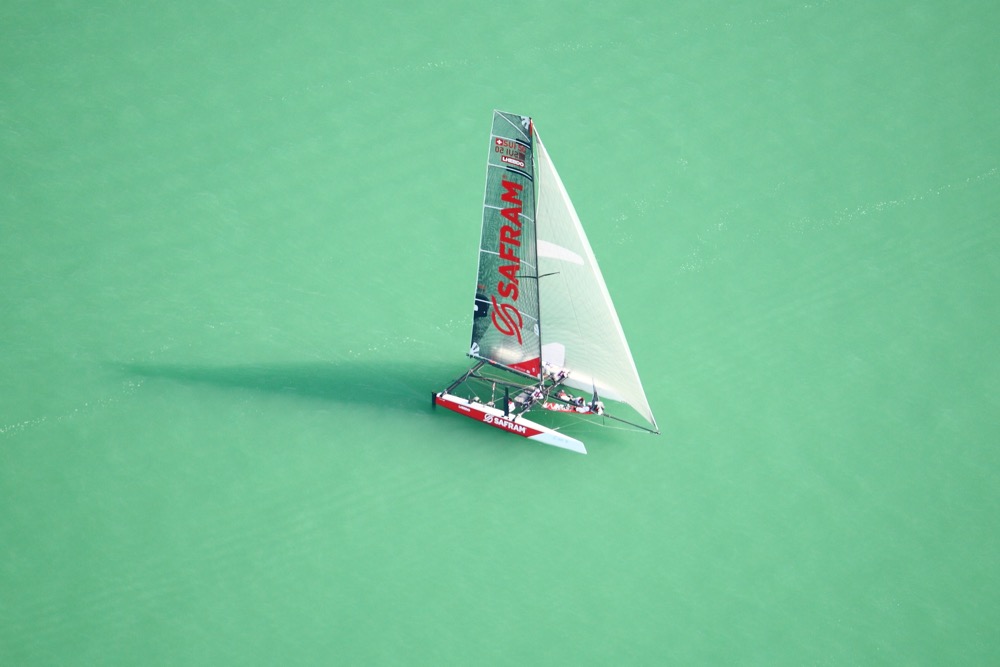 Balatonfüred, Hungary, 3 July 2015 – Safram’s European tour got off to an excellent start today when the Swiss team that is dedicated to promoting Swiss sailing and the Bol d’Or Mirabaud, won the Blue Ribbon on Lake Balaton in Hungary after a gruelling 17-hour race. The team on board the Ventilo M1, led by Rodolphe Gautier, crossed the finish line at 0200 on Friday morning a full 15 minutes ahead of previous record holder, Fifty-Fifty, a 50ft two-masted multihull, and third-placed Cellum, a Decision 35.

A fleet of 540 boats gathered at the start line on Thursday at 0900 in very light conditions. “We had between two and six knots the whole day,” said skipper Rodolphe Gautier. “But thankfully the wind increased in the evening and was about 10 knots by nightfall.” The crew for this marathon 170km race across Lake Balaton, the largest lake in Central Europe, was made up of Yves Guntern, Fabian Racloz, Attila Penzes, Fabien Froesch and Christophe Peclard.

“We battled with the Decision 35 for the first part of the race, then approached the channel badly and lost out, from there we fought hard to get back in the game and by the third mark we were in the lead again. After that it was a case of hanging on to first place for the rest of the race.”

The crew put their success down to having a powerful and versatile boat equipped with an excellent upwind sail package, but also to crewmate Attila Penzes’ local knowledge. “Attila really guided us when it came to the subtleties of sailing on this lake,” said Gautier. “It’s a tricky place to sail, much like Lake Geneva!”

Helmsman Christophe Peclard enjoyed the challenge of sailing on Lake Balaton: “It was a very long race on a very large lake,” he said. “It is a beautiful patch of water, but very complicated to read. It doesn’t work the same way as Lake Geneva! You cannot see the bottom at all; this lake is the same colour wherever you are. This meant we had to be super careful as the average depth was 4.5m and our dagger boards measure almost 3m.

“I really enjoyed the race. The level was good and it is a real celebration of Hungarian sailing, much like the Bol d’Or is for Switzerland.”

Rodolphe Gautier agreed that the experience had been a good one for the Safram team that proudly flies the Swiss flag and carries the colours of Safram, Hebdo magazine, the Bol d’Or Mirabaud and the Société Nautique de Genève. “It was an excellent experience for the whole team. The general public really embraced the event and lined the shores of the lake to support the sailors and the organisers of the Kékszalag and the local people gave us a very warm welcome.”

For those that don’t know the Blue Ribbon, otherwise known as the Kékszalag, it is a 170km race across Lake Balaton, the largest lake in Central Europe.  It was launched in 1934 and since 2001 has become an annual event – in 2010 the race was opened to multihulls.

After a few hours rest on Friday, the crew dismantled the boat and loaded it into the Safram truck – destination Italy, where the team will reassemble to race Lake Garda’s famous Trofeo Gorla and the Centomiglia at the end of August.